Soon, we left the bridge behind. Our tour continued to the St. Nicholas church. Earlier during my stay in Prague, I learnt how to differentiate Gothic, Baroque and Renaissance architecture. St. Nicholas Church is considered the most baroque church in Prague and rightly so. One can sense the ebullient passion with which the church was modified from Gothic into a striking rococo (late baroque) architectural piece. The exterior of the church is as impressive as any other building in the Lesser Town Square, however, every corner of the interior embodies baroque splendor. The top of the church forms a lantern shape with long, slender clear glass windows around it that lets light flow into the church and illuminate the golden ornaments around the structures. That day was particularly overcast and sullen. The church looked somber and shadowy. We could not feel the full extravagance of the structures. However, I was particularly drawn to one statue.

It depicts a king-like figure being revered by an angel and him beheading the devil with his spear. It is hard to notice in the picture but the figure’s facial expression is one of disgust, almost a smirk. His stature indicates an air of superiority and indifference. Late Baroque’s abstract depiction of feelings makes it difficult for us to discern what the figure was actually feeling – maybe disgust of the surrounding normality, maybe pleasure of torture or maybe a feeling totally unfamiliar to humans today. “The Late Baroque: An Introduction” helps us understand the statue better: late baroque period emphasized on man’s control of science, nature thus, control of even imperfections. Baroque operas reflected this obsession of control – subjects in operas during that time glorified and dramatized the power of the people who sponsored the shows. This statue at the St Nicholas Church reminds me of one specific baroque opera story. Roman Emperor Titus escapes a plot of murder and surprisingly, forgives the conspirers. I did not know what to get out of this story – it is undoubtedly an act of uncommon generosity, magnanimity and superiority but it is equally an intentional act to extend the reach of his power. The same reading refers to the Emperor as the “absolute ruler”; he was capable of “godlike goodness” and its total reverse at the same time. 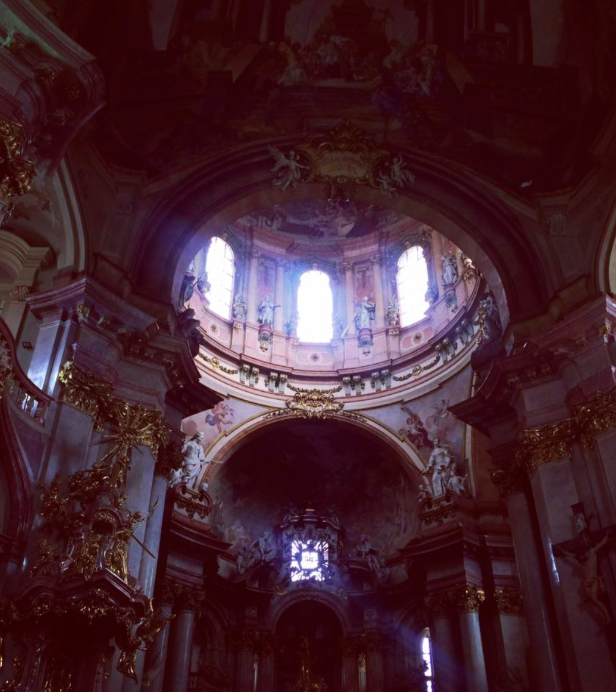 Top of the St. Nicholas Church

Somehow, the church makes me think that baroque was a period of widely revered strong opinions. The text says that it was the Age of Absolutism and, the Age of Science. It was the age of exaggeration with precision. This “dualism of pomp, and extravagance on one hand, system and calculation on the other” seems doubtful at first. But as we can observe through masterpieces like the church itself, exaggeration only looks out of place when it’s not controlled. Even extravagance can be normalized with a bit of structure and accuracy.

The Baroque period was also a period of deep irony. “The Spirit of Prague” associates the period with “violence, enforced exile, a loss of homeland, loss of original religion”. Yet, new preachers came. New, superior-looking churches were built. Alas, none of those could renew lost faith.

Andrej Babiš – a psychological profile of a “deprivant” and his voters

Getting to the position of a high-ranking politician requires a lot of effort. But in the case of many politicians, their success is based on unfortunate personality and psychological characteristics that they are able to …

What my internet looks like, after researching online fake news for six years

How does disinformation overwrite the imagination and beliefs of those who consume it? With this half-serious programmatic manifesto for a deadly serious issue, Romanian journal Scena9 sets out to explore online fake news and the …

The Artist in the Snares of Power

On New Year’s Eve, Russian state television aired a programme that represented the height of tastelessness and kitsch; compared to it, the former Engerian “cauldron of entertainment” Ein Kessel Buntes is the pinnacle of television …

The art of misunderstanding

The idea that the purpose of culture is reconciliation confronts Ukrainian cultural activists with a dilemma: how to preserve one’s dignity while keeping the attention of western institutions? In front of me sat a grey-haired …

On the situation of the contemporary globalised world

The lives and afterlives of Cold War weapons

In socialist Czechoslovakia, one of the world’s biggest arms exporters, issues of durability and demise were taken into account. Why, then, do Cold War weapons continue to resurface in deadly attacks and armed conflicts across …

On the peace of media redundancy

At the end of the year, newspapers and magazines are full of summaries and reviews of the significant and important things that have happened during the year. At the beginning of the year, they offer …

What would Jesus of Nazareth say?

The message of the coming of Jesus Christ into the world at Christmas time is probably the most enduring false message that has survived with us for two millennia. Without social media, trolls and misinformation. …

Hardened by cold and scarcity

The first year of Russia’s war of aggression and what comes next Russian attacks on civilian infrastructure are putting the resilience of the Ukrainian people to the test. While attitudes and moods on the home …

Are we experiencing family breakdown? What does the family mean to us and what function does it fulfil, or has it ceased to fulfil, today? The fourth panel of the Age of Mistrust conference, organised …