The speakers at the Journalists’ Forum that took place at Kasárna Karlín on 15 November 2018 also included British journalist John Lloyd from Financial Times, who founded the Reuters Institute and authored Journalism in an Age of Terror (I.B.Tauris 2017).

What does the term “full truth” mean to you? Do journalists look for the full truth? May more truth not necessarily mean “more facts” but more philosophy/personal testimony and less manipulation with readers’ sensibility?

Journalists cannot tell the “full truth” or anything near it. The “full truth” is unobtainable – if the phrase means that everything is given a place in the narrative, and everything is given its proper weight and importance. The best we can do is to do a report “in good faith”. That is, we report on an event or a person or a problem by describing it neutrally, without indicating approval or disapproval: we give necessary background in the same spirit; we quote reliable sources and opinions; we give some analysis of the effect of what we are describing.

None of that can avoid bias. See things through eyes and minds which have been taught, by ourselves and others, to understand things in a certain way. We can be aware of our biases and try to compensate for them. Above all we should get the facts right – the banal things – names spelled correctly, times and dates when events happened, ages given accurately…the things people care about. We should produce a report which someone of conservative and someone of radical opinion can agree is a fair, or fair enough account. That is quite hard and needs experience and care.

One of Oscar Wilde’s letters starts with the following sentence: “The supreme vice is shallowness.” (Epistola in carcere et vinculis). If we wanted to express what journalism is harmed by, may we say it like this? These days, Czech journalism is dead.

The quote from De Profundis is part of a very long – 50,000 words – letter from prison to Wilde’s gay lover. A fuller quote is “a real fool, such as the gods mock or mar, is he who does not know himself. I was such a one too long. You have been such a one too long. Be so no more. Do not be afraid. The supreme vice is shallowness. Everything that is realised is right”.

Wilde, who had been deserted by “Bosie” once he was in prison – he never returned his letters, never visited – wrote De Profundis towards the end of his 2-year sentence as a reflection on his life, and his imprisonment. In this quote he is talking about not knowing himself: acting without thought or care. It is a good text for journalism, because a lot of journalism – perhaps most – is done without real thought or care – done to satisfy the demands of the boss, done to a formula, done quickly and not revised, done to harm or praise someone without properly knowing them…and so on. Whether or not a journalist has to “know him- or herself” to be a good journalist is another question (which I cannot answer): but to reflect on what is being reported, or commented on, is a step to “knowing the other”. Of course, that takes experience, and an ability to see more deeply than the superficial, as well as freedom to write the truth (see above) and, if commenting, to give one’s own opinion.

Most readers with lower education and intelligence feel that elite journalists have manipulated them for many years. These readers have given no argument against this manipulation, but have a strong intuition and share this belief. As a result, they have recently given their voices to rude critics of Czech journalist elites. Now that the elites have lost their authority, no one asks them, no one argues with them. They have turned their backs to them and found new elites – people who criticise journalists (Trump, Czech PM Babiš).

Can you see a grain of truth in it? That journalist elites have not been honest with their readers, particularly with the intellectually disadvantaged ones? Have journalists brought it on themselves? Is it the greatest problem of today, not only in the Czech Republic?

I would like to know more about the feeling against elite journalists and their manipulation. It certainly is not just a problem for Czech journalists. Id got because of what journalists wrote during Communist times? Or what they are writing now? and why manipulated? As a general comment: elite journalists write for or broadcast on “elite” media are those who analyse events more fully, and who give their opinions on politics and international affairs – often, in democratic countries, from a liberal viewpoint. In the US, where President Trump has encouraged a movement against the “elite” media, trust in the news media has fallen sharply – perhaps because the issues which were dealt with by elite liberals were not those which were important to working and lower middle class Americans, and which often outraged their sense of morality – as gay weddings, transsexuals and so on. Also elite journalists have been usually liberal on immigration: which many, especially in Central Europe, don’t want. I don’t think it is so much a ,matter of not ebbing honest, but of making a priority of issues which many people find disturbing, or unwelcome.

I share the view in the sense that writers – especially novelists, poets and other creative writers – do not aim to express a literal truth but often to use imagery and fictional events and characters to express a different kind of “truth”. so in his novel “Slowness”, Kundera writes that “flung into the world’s misery, man sees that the only clear and reliable value is the pleasure, however paltry, that he can feel for himself: a gulp of cool water, a look at the sky (God’s windows), a caress.” This is a kind of truth: the pleasure one can experience, the cool water in the mouth and throat, the beauty of the sky and perhaps, if you believe in God, a glimpse of his kingdom; and the touch of someone loved, or at least desired. It is in a different sphere from journalists’ truth, with different responsibilities. When Shakespeare’s tragic heroes come to “know themselves” at the end of the dramas – and Regan, one of the two evil daughters of Lear, says of him at the beginning of the play that “he has ever but slenderly known himself” – they see a truth or truths which they have kept from themselves: in the v=case of Macbeth, this realisation of his misery as one who has killed his king gives him the sense – the “truth” – that the world is worthless, meaningless – “Tomorrow and tomorrow and tomorrow/Creeps on this petty pace from day to day….Life’s but a walking shadow/ A poor player, that struts and frets his hour upon the stage, and then is heard no more/It is a tale, told by an idiot/Full of sound and fury, signifying nothing”.

That’s a kind of truth: a truth of despair and self-contempt. Journalists “truths”, as Ive said above, aren’t like that. They are at once easier, and more difficult. 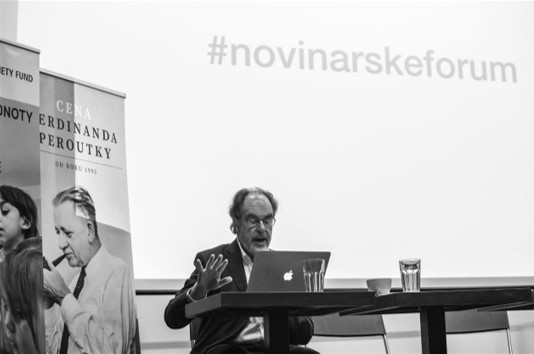 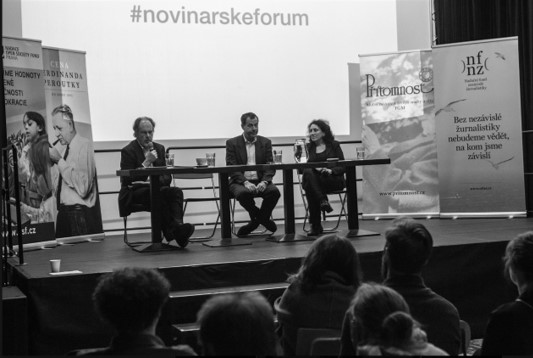 From the left: John Lloyd, Financial Times; Martin Jan Stránský, publisher of Přítomnost; Gemma Poerzgen, a German journalist focusing on Eastern Europe and a board member at Reporters without Borders. Photo: Michael Kratochvíl.

The arc of world war memories

War memorials and faded names on plaques have lost their power to remind us of battlefield realities in the past. We need new ways to make us remember, force us to think. ‘Never forget’, say …

Today’s world once again demands strength and the ability to defend oneself. But these manly virtues have almost disappeared from the lives of boys and men. Modern men should be empathetic and caring – this …

Guilt and repentance in Berlin

Hans-Hermann Tiedje, former advisor to Helmut Kohl, has entered the debate about German culpability in the current war in Ukraine. It is the biggest mistake in the history of the Federal Republic, says the well-known …

When self care is guilty pleasure

Testimonies of women in war Who can focus on interior design after the massacres of Mariupol, Borodyanka and Bucha? Ukrainian women tell how their relationships with self-care, beauty and consumerism were changed by the war. ‘I …

Out of cities and work, India´s working women struggle to rebuild their lives.  Millions of internal migrants were sent back to their homes across India since the first coronavirus lockdowns. By the time restrictions lifted, …

When vegetarians get a craving for meat

The war in Ukraine is strengthening Europe’s internal constitutionalism. It redefines the East-West divide and replaces the conventional Cold War narrative with one of decolonization. In 1995, American anthropologist Clifford Geertz lectured at the Institute …

Russia and China – Butch Cassidy and the Sundance Kid

Russia and China are working together to limit US influence. They claim that real democracy is in their countries, not in the US. The former regards Ukraine as its errant child and the latter as …

No empire without end

Putin’s Ukraine war is drawing a curtain on ‘Pax Rossica’, the notion that Russia can dominate the post-Soviet Eurasian landmass. The Kremlin’s strategy has changed since it failed to gain immediate control of Kyiv. What …

The disintegration of America and the American Ideal

The news in America is full of the recent ruling by the Supreme Court, which in a landmark decision, overturned the 50-year-old right of women to have an abortion.  The ruling significantly increased the ongoing …

The US Supreme Court has overturned two landmark cases that protected a woman’s rights over her own body for 50 years. How did ‘fetal politics’ — a political movement that has turned embryos and fetuses …